September 30, 2018
I was not surprised to find another comment deleted in the Boothbay Register, identified as spam, in fact, I expected it, and so I took a screenshot of it in it's published state (see below). It was posted in a discussion about local political candidates, the people who want to be our representatives, making the decisions about what legislation is enacted.


The deleted comment brings up the Pine Tree Zone Tax Exemptions, which are long overdue to be repealed but there is no existing public dialogue to even suggest the idea, except for occasional articles about or by OPEGA, which is the Maine State Office of Program Evaluation and Government Accountability, and so they have to be allowed through every once in a while!

OPEGA has been reporting for years that the Pine Tree Zone is not meeting its purpose, and costs the taxpayers more than it is worth to the taxpayers, but, based on what I have seen, in my research, the taxpayers are pawns to be played in a transactional exchange between the public and private sides of our state government. The taxpayers may lose, but special interests profit from the exemptions and so the Legislature keeps passing more Pine Tree Zone styled legislation such as the Major Business Headquarters Expansions Program passed last year, which I wrote about in my previous post.

The good news is that the Pine Tree Zone is entering into its sunset years but the bad news is that, as with the Seed Capital Tax Credit, there will most likely be a push to renew it complete with full media support.

In the latest OPEGA report on the Pine Tree Zone, OPEGA sounds quite frustrated with making reports which are never seriously considered, such as in this paragraph:

OPEGA determined that many of the approved evaluation questions for the PTDZ Program could not be answered without considerable effort because of the shortage of readily available program data. We believe the data necessary to answer these questions could be obtained. However gathering it, preparing it and assessing it would require a significant amount of time for OPEGA staff and potentially the staffs of DECD, MRS and business participants. Given that the PTDZ Program has already begun to sunset and new certifications will not be issued after next year, OPEGA decided not to pursue obtaining that data at this time


The Major Business Headquarters Expansions Program is Pine Tree Zone styled legislation so when the Pine Tree Zone is phased out, a bigger meaner Pine Tree Zone is already in place. I have searched the Major Business Headquarters Expansions Program and related phrases but have not found the Major Business Headquarters Expansions Program reported or discussed in the media, despite the fact that LePage's last attempt to pass a similar bill received a great deal of coverage, It is no wonder that the public-private government wants to keep this bill secret. Taking the giant step of creating a tax on the Maine people (see the last post) to cover free capital for global and national corporations might stir up some resistance, as it should, Imagine how this can evolve into the future!

The purpose of LePage's transformational Act is to lure global corporate business and culture to Maine. The lure is a 2% refundable tax credit, which in practice is arguably a tax levied on the people of Maine based on 2% of the global corporation's global investments  The wording is vague as to whether the 25% of total employment to be located in Maine still holds if the corporation employs more than 5000 employees. The Maine Legislature was very specific when it included the term "unitary business" in its description of a "qualified investment". The term "unitary" has a specific legal meaning, establishing that neither the specificity nor the vagueness of statutory language is an accident.

We should be able to bring up this issue in the public dialogue as we approach election season, but that is not the world we live in.Norms need to change or things are only going to get worse. 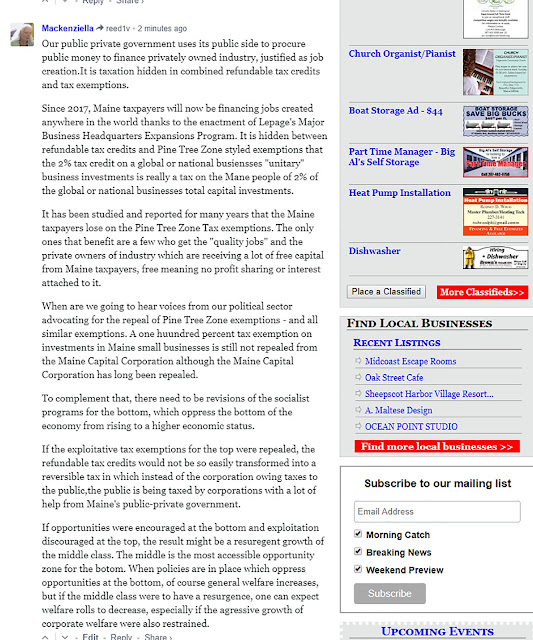 Here is the same post from my Disqus file after it was deleted: At first the Disqus message said it was deleted as spam, when I checked that it is not spam, the message changed to what is now displayed.


Since I wrote the above, the status on the above Disqus post has reverted to Spam. I took another screenshot. If that changes, I will report, but historically it doesn't change. 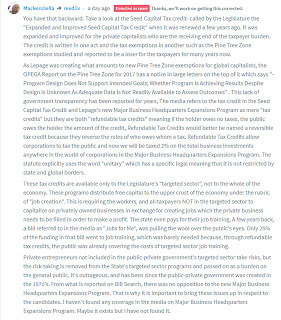 Its Not the Economy, Its the Culture!

December 25, 2020
Trump has brought into focus a long brewing social crisis SELECTED FOR THE BEST OF TREMR darren-deloach-unsplash I was a Republican, until the 2016 convention when a petition gathered enough signatures to let delegates vote their conscience, and was promptly dismissed by a voice vote.  That was when I first became aware that the Republican party was afraid, intimidated and dominated by the Trump base. I felt the party took the traditional base of the party, which included myself, for granted, as if we were party players, guaranteed to support the party, unquestionably, no matter where it went. Deeply ro o ted party obedience has been established. Many whom I once respected and are no longer recognizable. Those of us who did not follow the leaders no longer have a place in the Republican party and have largely become Independents. I voted straight blue in the last election, but consider myself Independent. There is no reason to believe that either one party or the other will continue to
Post a Comment
Read more