In Maine it's The Innovative Class Vs The Underclass with the Middle Class A Relic Of By Gone Days.

July 02, 2014
As a person of independent views, I am often approached by those whom I consider to stand for the modern day thought police. The conversation is often framed as "We (or I) are trying to help you", which means they are trying to reprogram my thinking to be consistent with acceptable thought as issued by Maine State Inc and its comrade the Maine main stream media.

I recently had such an encounter when I posted on AS Maine Goes- when a users who clouds his true identity under the name of "economike" stepped up to play the role of the thought police and was educating me about economics pursuant to the world view which has dominated, to the exclusion of all else, both the political class and the Maine main stream media during the decades in which the Maine constitution was swapped out as the governing rule of law in Maine to be replaced by governance of a corporate state serving as an instrumentality of global capitalism. Were this a science fiction novel, I could use that dialogue verbatim.

Even more revelatory was when Melvin  Udall stepped in- a poster who also uses the pseudonym P.C. PoppyCock, when he writes the blog- The Other Side of Town, which is commonly known because Mr Udell once had it posted on his As Maine Goes bio. 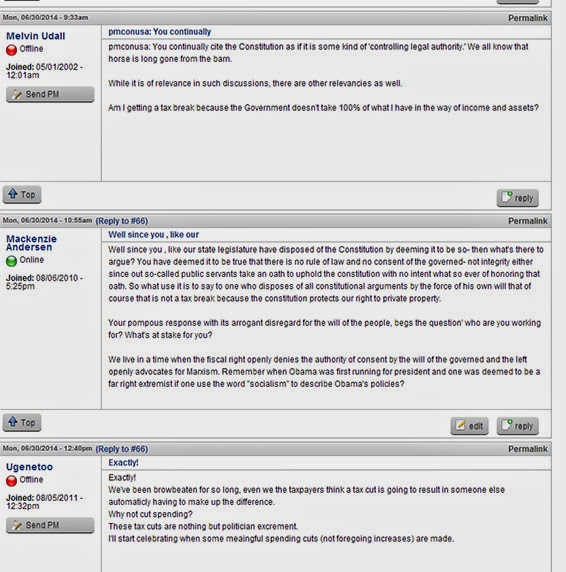 Melvin Udell: You continually cite the Constitution as

if it is some kind of 'controlling legal authority.' We all

know that horse is long gone from the barn.

Quite an amazing confession from Mr Udell and one that I suspect is widely held among Maine's political class, all of whom can take credit for the swap out of the state constitution for the corporate state. One just doesn't usually come across it being spoken so openly and directly. Notice the use of the pluralist collectivist "we"- a common tactic of the thought police who speak as though everyone in society is collectively of one mind, which therefor qualifies such views as absolute truth: 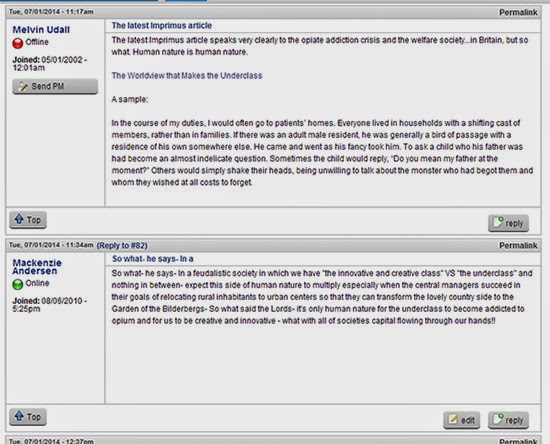 clearly to the opiate addiction crisis and the welfare

society...in Britain, but so what. Human nature is

The Worldview that Makes the Underclass

In the course of my duties, I would often go to patients’


homes. Everyone lived in households with a shifting

cast of members, rather than in families. If there was an

adult male resident, he was generally a bird of passage

with a residence of his own somewhere else. He came

and went as his fancy took him. To ask a child who his

father was had become an almost indelicate question.

Sometimes the child would reply, “Do you mean my

father at the moment?” Others would simply shake their

heads, being unwilling to talk about the monster who

had begot them and whom they wished at all costs to

Is Mr Udell also representing the collective "We" of Maine's overlord society when he depicts "the underclass" as opium addicted losers?  Personally I suspect that he is, that the same pompous  arrogance that uses self aggrandizement to crown its self as a creative elite and thus so justified in having public wealth redistributed into its own hands for its own use- regards the rest of society- which is now is close to being all encompassed by the phrase "underclass" in as derogatory a way as they complement themselves on their superiority.


Mackenzie Andersen: So what- he says- In a feudalistic society in which we have "the innovative and creative class" VS "the underclass" and nothing in between- expect this side of human nature to multiply especially when the central managers succeed in their goals of relocating rural inhabitants to urban centers so that they can transform the lovely country side to the Garden of the Bilderbergs- So what said the Lords- it's only human nature for the underclass to become addicted to opium and for us to be creative and innovative - what with all of societies capital flowing through our hands!!


Thereafter the thought police chimed in as a chorus making much to do over my use of the name of the Bilderbergs- so much so that I started to wonder if I had expressed more truth than I knew! That was the only point of interest- the idea that the population relocation plan is destined to create inner city opium dens drew no reaction!

Further evidence that Maine is now a two tier society - the "innovative and creative" VS the "underclass" is found in another online discussion in the comments section of the Portland Press Herald where my use of the archaic term "middle class' drew this response:

It shows my age- I grew up in a time when the meaning of middle class as those of middle income was commonly understood.