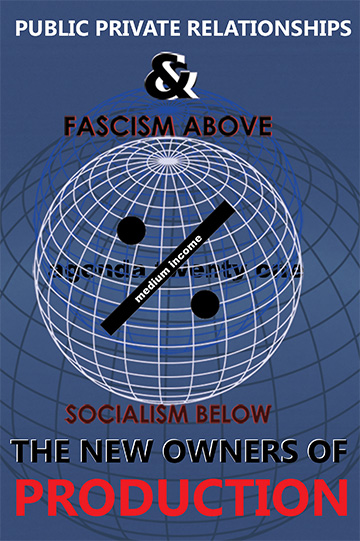 Get Public Private Relationships and the New Owners of the Means of Production on Amazon Kindle!

( note- an update is being processed to fix mismatched title pages but if one clicks on the title links it gets you there anyway)
Public Private Relationships and the New Owners of the Means of Production tells the story of the transformation of Maine from a state to a development corporation following the history and records of economic development statutes.

In 1876 an amendment was added to the Maine Constitution which prohibits the Legislature from chartering corporations by special acts of legislation.

In 1968 Maine became a constitutional Home Rule State as authority was granted to municipalities to fund economic development projects with municipal bonds approved by a public referendum. Previous to Home Rule, general obligation bonds in which a particular industry received tax revenues was struck down as a violation of The Maine Constitution, Article IX, Section 8 which mandates that all taxes be apportioned and assessed equally. Home Rule grants authority to issue general obligation bonds for economic development purposes only at the municipal level of government.

However, in 1976 Governor Longley called together the heads of Maine industry and the Maine Legislature declared that centrally managing the economy is an essential government function which must be done through public private relationships and the Maine corporate state was born. Public Private Relationships and the New Owners of the Means of Production compares the political ideology and its associated structure of government put into place in Maine, USA, in the late seventies with Mussolini’s fascism as implemented in Italy by overwriting the Italian Constitution with statutory law.

First on the agenda was to set a mission to eliminate public referendums. Next was to charter the Maine Capital Corporation, a private investment company which would be authorized by a special act of legislation to use tax credits to sell stock. Written into a subsection of the charter for the Maine Capital Corporation was a general provision exempting all investment companies investing in Maine small businesses from taxation, thus establishing the tax credit as a refundable tax credit, one by which if no taxes are owed, the public owes the capitalists a refund on his investment.
Refundable tax credits came into use in the USA in 1975 at the onset of a rapidly escalating inflation which remains unabated to this day. In the subsequent years Maine aggressively expanded a corporate state network as the legislature declared that a corporation is not a corporation if it is an instrumentality of the state.

Throughout the decades the Maine media supported the growth of state capitalism and targeted sector economics. If the media asked the public for their opinion, the question was asked of those on the receiving end of redistributed public wealth. Today the Maine public subsidizes the targeted sector, which is definitively the upper crust of the Maine economy. The media seldom asks the opinion of those outside the orbit of the state’s redistributive policies.

Public Private Relationships and the New Owners of the Means of Production gives voice to a view opposing Maine’s centrally managed economy. Mackenzie Andersen compares the rhetoric, structure and means of implementation of Maine’s corporate state to Mussolini’s fascism and contrasts it with the philosophy that founded the United States of America and the Maine Constitution. Through analysis of the language written in the statutes as if in code, and the history of the implementation of the corporate state structure in which the design of the whole is concealed by its parts, Mackenzie Andersen tells a shocking history of public exploitation by those elected to serve as the people’s representatives.