January 27, 2018
I first published this post on my seldom used blog, Sitting On A Log. It was the first blog I ever created. The name represents the activity of sitting on a log in the woods, or a field, or a mountain top- somewhere in the natural world remote from the cultural world, where one's mind can wander wherever it wants to  go. Since it is my birthday, I decided to publish it here as well: I just added one phrase to this post which isn't in the other- I'll let you guess which one that is.

Today, January 27 is my seventieth birthday. I am giving myself the gift of allowance to tell my story my own way. Throughout my life, whenever submitting biographies, resumes and so forth, I have thought what if I were to tell the real story about what has formed who I am instead of just the things that conventional accounts are made of ?

My story begins with my first memory after finding myself in the material world. I was lying in a crib. Off in the distance there was a light shining on a circle of people who were not paying attention to me but talking among themselves. I was listening to a very loud crinkling sound which I took to be the sound of the material world closing around me as a huge globe or a womb forming from whence I had been before..

Throughout my life, I have often recalled this memory  and wondered how I could have formulated such a perception before I had any knowledge of language. In my forties I became involved in reading the quantum philosophers, David Bohm, Neils Bohr, Heisenberg, Menas Kafatos and Robert Nadeau and others. They had a similar dilemma. How does one tell the story of what was discovered in a realm beyond that in which the laws of classical physics apply, by using a language that was constructed within the classical physics paradigm ?  I do not know how it came to be that my memory of this earliest experience is relived in my adult mind using constructs of a language that my infant self never knew- but there you have it. As I recall that experience today, an opening had been made in the womb of the material world to let me in and as the opening healed to make the circle of the physical world complete, it produced a very loud crinkling sound, coming from everywhere.


I was fortunate enough to have parents who saved our childhood drawings. Shown above is a drawing found in a box which included my father's designs for a new mid-century line of ceramic functional forms, as well as building designs, car designs  boat designs and an unexpected Christmas card from Jack Bilbo. The time must have been 1952-1953 when I was four or five years old. My drawings at that time always included multiple figures of little girls with big smiles on their faces as you see here, an optimism which has prevailed with me throughout life through high and low as I crafted a personal philosophy life in which life is an art of surfing metaphysical waves, similar to surfing an ocean wave, though I have never done so. Where ever we focus is where ever we are and will be so that even in difficult times, the focus is to maintain is on spiritual well being. My seventy old self feels at one with the exuberance, well being, and relationships expressed in my childhood drawings. That is not to say that my life has been followed by one joyous moment after another, hardly, but when going through the rough times, my focus is on surfing the wave that is becoming the spiritually right place to be!

This next drawing is done by a slightly older me. I call it "The Gardeners Dance", Today I could  sign as an adult and call it found art. 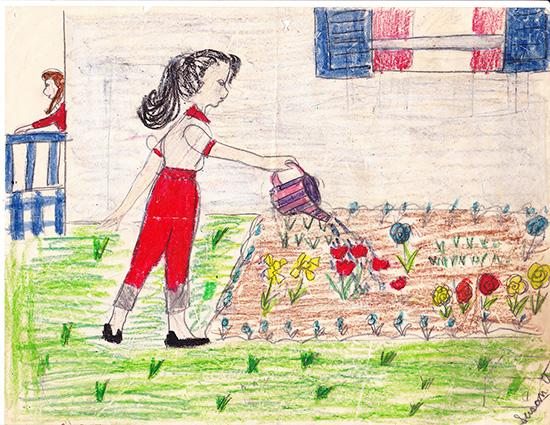 Notice the dance pose that the gardener maintains. This was before I took dance classes in which one is told that all movement comes from the center core of the body but there she stands, already understanding that, centered and balanced with limbs extended. Once again there is another figure in the story, representing awareness of the human world around, but this drawing is about the joy of work, ordinary every day work, watering a garden and making things grow, - process! ( or in todays forbidden language "production"). The young lady is stylishly dressed with the collar and cuffs of her blouse coordinated to her rolled up slacks. Remember when pants were called slacks? Then there are the ballet slippers, so perfect for gardening! She waters the garden with a watering can. Had hoses not been invented ? -or does this symbolize doing what has to get done using whatever tools which at your disposal ? Grow your own garden with your own available resources.

I had blond hair but the figure in the drawing has dark hair, like my mother, signifying that at that time I identified as my mother's daughter. My parents were very different from each other. In the first half of my life I was very much my mother daughter but in the second half of my life I am my father's daughter. My mother was a manic depressive and my father a worry wort, so between the two of them I crafted my philosophy of life as a wave that we surf.

And Now A Word From Our Sponsor:

I sometimes see people asking to give to a nonprofit cause on their birthday but FaceBook does not list our non-profit giving cause, The Andersen Design Museum of American Designer Craftsmen, If you would like to give such a gift today on my birthday, please make a donation. Many Thanks.