As Confucius Institute installed at USM, American & New England Studies Become a Candidate For The Cutting Board 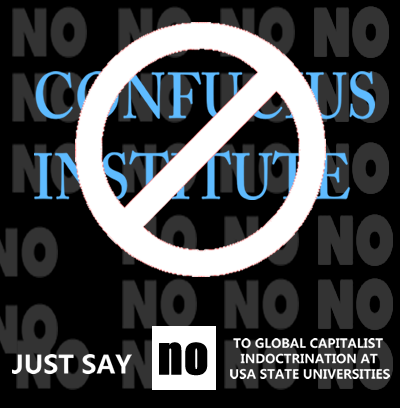 According to testimony of former student:


Dr. Pease's Hamilton and Jefferson course at UMO and it was one of the most important American history courses I've ever taken. He had a passion for the topic

The course was a course on the Federalists Papers. Today when I searched for the phrase "federalist papers" on the University of Maine curriculum, it came up blank and there appears (to my limited knowledge and research efforts)  to be only one course offered in American and New England Studies and that is currently under consideration for the cutting board.

The institution of the Confucius Institute is lauded with these words in the Portland Press Herald:


The state's first Confucius Institute, set up by Hanban, of China's Ministry of Education,

.... leaders in government, business and education in Maine see it as a vehicle for increasing the state's ties to China, ..... Maine goods worth more than $275 million were exported to China in 2011.

......McDonnell said banned topics and questions of academic freedom were never an issue in USM's negotiations with Hanban...

The article then goes on to claim that there is no cost to USM (University of Southern Maine) because China provides the instructors and materials and $150,000 in startup funds, and will provide about $100,000 a year to administer the institute.

Note the very important adjective "first" implicating that this is the direction in which Maine's "leaders in government, business and education" are deliberately driving Maine on all levels including tax-payer subsidized education at the University of M.

So-no cost- no and no banned topics or interference with academic freedom- it's just a co-incidence that what appears to be the only course left on American and New England Studies at the University of M is a candidate for the cutting board- surely increasing the possibility of receiving more cash giveaways from the Chinese! No need for arm-twisting- this is an entirely voluntary decision by Maine leaders in government, business and education, who have conflated all three of those fields into economics- as is the way of materialistic political philosophies ( philosophies- NOT based on natural rights and the existence of the Divine), now replacing the American political philosophy at the University of M.

Maine has long been a bought state- first bought by the United States federal government and now bought by the Chinese government. I submit that we would never have arrived at this state of affairs if we had not slept while our legislature trampled our state constitution in order to grant unto itself and the administration the authority to centrally manage our economy- as is the case in Marxist systems.

I have written to Noel Gallagher, who wrote the Portland Press Herald article to ask for the source of his information that "Maine goods worth more than $275 million were exported to China in 2011" and any further information he might have about how those figures are calculated.

In the past year we have seen a growing alliance between economic development tzars in Maine and education institutions of Maine with China- motivated by the most obvious reason- following the money.

In 2013 the University Of Maine, already featuring a minor in Marxist and Socialist Studies, and already the home of the state's advanced manufacturing center- ( an implementation of the Marxist political philosophy in which the state controls the means of production), embraced the Confucius Institute,  and promoted it with the following implications that there will be more Confucious Institutes to come:


"Housed on the USM Gorham campus, the Confusions Institute – the first in the state of Maine – brings Chinese language and culture to the state’s students, educators, and community members."


Those cities are apparently full of empty residential buildings, and it’s said that buildings without buyers are made possible by government driven loans. The thinking there is that with China’s government desperate to maintain high GDP growth, it’s essentially funding the building of anything so that GDP measures continue to soar.

Does this thinking sound familiar? It should- it's the same kind of thinking that drives the Maine economic development policies. Will the cultural studies at Maine's new Confucius Institute feature a course of China's ghost cities with biographies of the great economic development visionaries who created them?

Maine's private school system is hot to get Chinese students because they yield a better return on the the dollar. Maine educational visionaries also think it would be great to have sister cities in China- Will anyof these new sister cities be one of China's ghost cities?

Confucius Institute also have non-academic goals, according to scholars and journalists. The CI also has the goal of improving China's image abroad and assuaging concerns of a "China threat" in the context of the country's increasingly powerful economy and military[22][23] http://en.wikipedia.org/wiki/Confucius_Institute

Global capitalism is the new political ideology of the twenty first century. It uses both Marxism and the American political philosophy as it's "instrumentality". It transforms systems governed by free enterprise into socialist systems so that the bureaucratic class can gain access to public money and redistribute it to their friends. This is exactly what has transpired in Maine, especially over the last forty years when the legislature statutorily transformed the Constitutional government of Maine with the charter of the Maine Development Foundation ( a non-profit corporation) and granted unto themselves the "essential government function" of centrally managing the Maine economy and thus the ability to acquire redistributing authority over the public's wealth.

Once a government is centrally managing the economy it becomes a socialist system. In communist systems, global capitalism transforms the system into a version of free enterprise systems so that the bureaucratic class can gain private ownership of the public wealth.


"Over the ensuing decades, particularly in the 1990s when massive investment poured into China, the families of CCP bureaucrats utilised political power and links with foreign capital to transform themselves into a new property-owning capitalist elite. CCP-connected entrepreneurs, executives, outsourcing contractors, import and export traders and professionals have emerged as the junior partners of major transnational corporations in ruthlessly exploiting the working class."
World Socialist Website -Chinese regime amends constitution to protect private ownership- 2004


There is now a discussion of The Federalist Papers featured on the Round Table of The States Discussion Forum on Preserving The American Political Philosophy- The Website.

And a discussion taking place on AS Maine Goes

and at The Maine Citizen

The above 2004 article about a lecture delivered at The University Of Maine is interesting in the light of ten years later and over five years into an Obama presidency.


China looks to municipal bonds to clean up local-government debt

But the pessimists’ hype overlooks one of the most important drivers of China’s modernization: the greatest urbanization story the world has ever seen. In 2011, the urban share of the Chinese population surpassed 50% for the first time, reaching 51.3%, compared to less than 20% in 1980. Moreover, according to OECD projections, China’s already burgeoning urban population should expand by more than 300 million by 2030

Of course that will be helped along by the Chinese government !