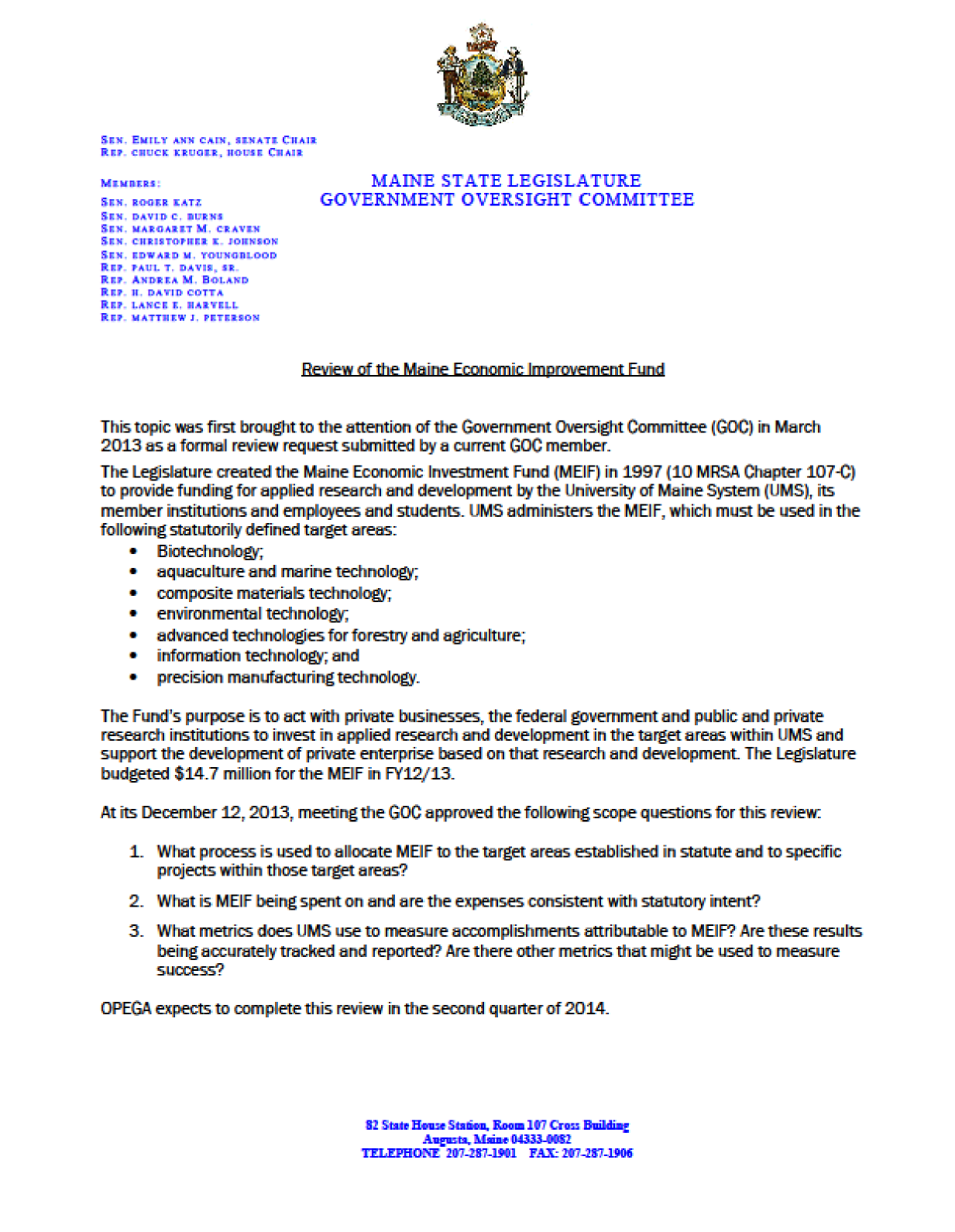 Today I learned  that there is a limited OPEGA report in the works, focusing on economic development funds going to the University of M. It isn't clear from this description if the cost of operating The states Advanced Manufacturing System at the University of M is covered but I have a number of questions I would like to have answered .

Dear Senator Cain and members of the Government Oversight Commitee,

I am writing to you in your capacity as the Chair of the Government Oversight Committee regarding the Opega Report of the Maine Economic Improvement Fund.
I could not get the online audio to play also I do not know if my questions are answered there.

The review of that report does not make it clear if questions I have regarding the states manufacturing center ( Advanced Manufacturing Center) located on the University of M campus and employing student labor (as reported in Maine Biz) , will be included in the report.

The review says that you will examine how the funds are used to determine if the use reconciles with Maine statutes.

The review says nothing about reconciling the use of public funds with the Maine State Constitution, which represents the people’s will and the consent of the governed You took an oath to uphold the constitution- not the statutes !

It is my conclusion, based on years of independent research , that the economic development statutes do not reconcile with the Maine State Constitution, particularly Article IV , Part Third sections 13, 14 7 15, where in the legislature is prohibited from chartering corporations by special act of legislation with an exception for municipal purposes and if the object of the corporation cannot be done another way. Clearly the object of the plethora of corporations serving the purpose of being “an instrumentality of the state’ is economic development. Economic development CAN be done another way- through the private sector. “An Instrumentality of the state” is clearly a state purpose and NOT a municipal purpose- and on that basis most of the economic development statutes through which the state centrally manages the Maine state economy and redistributes the public’s money to private interests -are not reconcilable to the state constitution.

I would also like to see a clear diagram of the relationship between the states public charity, The Maine Technology Institute which financed the building of the states manufacturing center at the University of Maine and represents 25% of the business that the state manufacturing center does- according to MaineBiz, which also writes that the state doesn’t charge the public charity (MTI) overhead because that would be like the state charging the state. The public charity- MTI, was chartered in violation of Article IV Part Third Section 14 of the Maine State Constitution- which makes no exception for non-profit corporations and no exception for public charities. The use of a public “charity” to gift money to for-profit private enterprises makes a complete mockery of the whole idea of a “non-profit” organization!

I would also like to know the percentage of prototype designs produced at the state’s manufacturing center which are ultimately targeted to be produced in global low-cost labor markets- that compete with American manufacturing state side? The state is extracting capitalization from the public here to finance government run production that competes unfairly with the very source of the state’s own capitalization!

What kind of economics is that? perhaps the type that is being spread world wide by the Dongbei University of Finance and Economics in China ,featuring divisions such as the international Cooperation Office, The School of International Business and the Global Institute of Management and Economics along side a school teaching Chinese language –clearly intended to be the global language of a world subjugated to global capitalism.

I submit my outrage that the University of M- an American and Maine taxpayer subsidized institution of higher learning has sold a big chunk of that educational system to the Chinese government who will install their own instructors and material on American soil-under the brand name “Confucius Institute” which is none other than the Dongbei University of Finance and Economics !

I submit that a statute needs to be passed that when ever a taxpayer subsidized institution sells a chunk to a foreign government as the University of M has done, that it forfeits all federal and state taxpayer subsidization.

Further more I submit that it should be a requirement for a taxpayer funded institution of higher learning to prominently feature studies in the Federalist Papers, The American Constitution and the Maine State Constitution- all the more so when that same university is offering a minor in Marxist and Socialist Studies, has constructed state owned means of production on the university campus- and sold a chunk of the taxpayer funded university to the Chinese Government so that a foreign government can educate American youth in it’s ill advised economic polices-that are just as much constructed on a bubble as the IPO boom or the mortgage loan fiasco in this country.