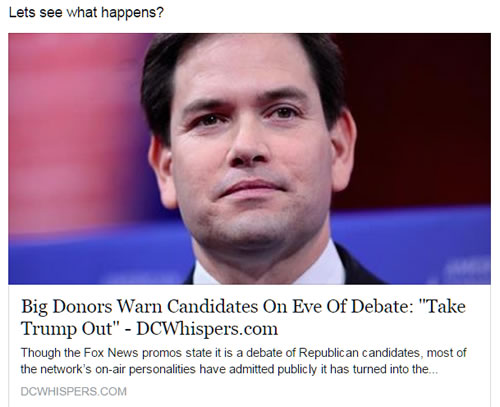 I have previously seen another headline similar to the one above connected to a story line completely fabricated in the mind of the the author of the propaganda journal DCWHISPERS.COM. The author of these hear say articles with their cleverly crafted headlines and specifically targeting Rubio, is James Jeness, a professional marketer who owns the website BIGJMMedia. Although the author of the articles published by DCWHISPERS is never identified, I uncovered his identity and address by looking up DCWHISPERS.COM on WhoIs. I have provided only the link here which does not require a captcha code but I followed it  into the capcha section of WhoIs to find out more about the identity of the author of this propaganda campaign against Rubio and others. Mr Jeness does not reside in Washington DC. He resides in Anderson Indiana. It's a pretty loud whisper that is heard all the way from Washington DC to Anderson Indiana. Mr Jenesses biography reveals no expereince relative to Washington DC, No inside connections relative to Washington DC, but he does have professional connections to the entertainment industry for over thirty years:

This is from his LinkedIn biography:

So it is fair to say that in the case of DCWHISPERS- whose posts are being distributed by the anti-establishmentarians across social media,  the puppet master is professional marketer working in the entertainment business - no less! Interesting because the anti-establishmentarians are all outraged that their critics tag the Donald as an entertainer.

Once Mr Jeness concocts a hearsay article with well crafted headline and photo- his "journalism" is distributed via a network of alternate right wing media sites which are the driving force behind the Trump campaigns success. Mr Trump himself is part of the entertainment establishment which understands well the relationship between entertainment and politics and knows how to manipulate it behind the scenes as is the case with the unidentified author of the often quoted DCWHISPERS.COM