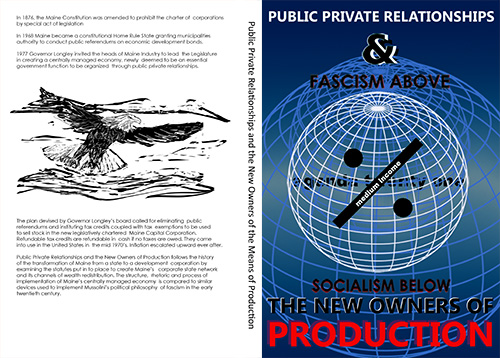 Public Private Relationships and the New Owners of the Means of Production is now available in print- in time for the start of what is currently looking like Amerika's first fully open public private federal government with globalist Trump and family seeming apparently unaware as to any conflict of interest between running their global business empire in conjunction with administering the US government!

As in Maine, public private relationships are surrounded by a fluid relationship to  general laws governing the rest of society. Here is a post-election link to a story about Trump and family's business dealings in India,
Trump’s extensive deals in India raise conflict-of-interest concerns

Here is a link to my book documenting how government by public private relationships has been aggressively and incrementally replacing government by the Maine Constitution in Maine over the last forty years:

Globalism - like Agenda Twenty One, is planned globally and implemented locally. I do not know of another documented record which provides such an in-depth look at how a global agenda is implemented locally in the USA as is to be found in Public Private Relationships and The New Owners of The Means of Production. If my book has any influence, I hope it will be to encourage many such in-depth investigations at the local level.