Navigating Through A Landscape of Linguistic Constructs And Other News 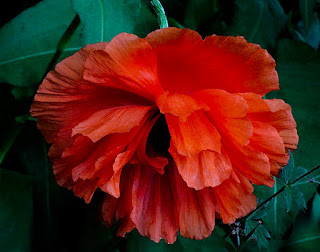 THE OFF TOPIC NEWS ! This summer was a strange season for the garden. The field of poppies, a perennial subject of local social conversation, did not make its appearance. In the front garden, poppy pods dried up and fell to the ground without blooming. This fall there were hardly any fresh new poppy leaves in the front hill side garden. I foresee a scant display next spring. If the property falls into the hand of someone who will nurture the poppies, they will return.

It is our hopeful dream that the Andersen Design flagship location can be bought back from the bank and made into a historically preserved location for The Andersen Design Museum of American Designer Craftsmen, similar to what has been done with Russel Wright's former home,Manitoga.org, preserving the memory of a culture receding from the Boothbay Peninsula to make way for the plans of new and well financed centralized development groups. Otherwise the house and garden may be torn down to be replaced with the new homes of the new Boothbay and gardens composed of many annuals lined up in military formation, and not inviting to the free spirited Poppies.

BOOTHBAY'S MINI_TURNPIKE POST GOES VIRAL! My post on the new obstruction planted in the middle of the roadway going to and from Boothbay Harbor,was my first ever viral post. likely helped along by the fact that it was the only media commentary on the local disaster. Although the town selectmen used taxpayer money to create a video to promote a yes vote for the mini-turnpike, and Wendy Wolf, spokesperson of the JECD group advocated for the construction of the obstacle, not a peep was to be heard from any of them once the concoction of transportation design was paid for by taxpayers from every corner of of our state and the deed was done. Only the corporate state's propaganda journal, Maine Biz, had anything to say about it, calling it Boothbay’s Route 27 roundabout revitalization. The article features Paul Coulombe talking about his purchase of the clipper mart which he bought only to clean it up of all the oil and grease that comes with gas stations needed to serve the predicted ever increasing traffic. The alleged heavy traffic was used to justify the use of state and local taxpayer money to create the tiny merry-go-round in the middle of a formerly rational road way. This is surely a testimony to Paul Coulombe's heart felt concern for our environment. Perhaps I should have appealed to Mr Coulombe to use his all mighty power to get local politicians to pay attention to changes in the Knickerbocker Lake water supply as revealed in the inability to use said water supply to mix ceramic casting slip

WE PASSED A MILESTONE ! The Andersen Design Museum of American Designer Craftsmen has gotten past the $1000.00 personal contribution required before we are permitted to apply for foundation grants. Locally, many thanks to Kathleen Cook for her generous contribution of $100.00. We are hoping to take a place in Edgecomb where we can set up a preview gallery and temporary working offices for the Museum. We still need to raise $1700.00, quickly so that we can procure the space. If you are reading this blog and appreciate an alternate voice, even if you do not agree with every thing I say, but just because you believe we should have a Maine media which gives voice to many different sides, then please consider showing your appreciation for freedom of voices, by making a contribution to The Andersen Design Museum of American Designer Craftsmen

Now that the gate  to our path to applying for grants,has finally opened, most of my writing time is dedicated to that mission. At the same time it is an eye-opening experience to the way our two tiered economy works I will be writing about those revelations in posts to come, commenting here only that there is a new political rhetoric that should qualify Andersen Design for a NEA grant, The new rhetoric- straight from the NEA website is about connecting the "creative" community with the ' non-creative" community. This is an interesting paradox when one considers that the "creative" community has come to be construed as the non-profit community by state government agencies such as the Maine Arts Commission,whose functions were radically expanded in direct correlation to the creation of the National Endowment For the Arts, a wealth re-distributive function of the federal government.The free enterprise economy is the wealth creating economy, a creative function, but in the linguistic constructs of the wealth re-distributive sector, the wealth creating economy is relegated as "the non-creative" sector. This informs why, in the dictionary used by boards of the wealth re distributive sector, the word "production' signifies one who is only in it for the money, part of the "wealth producing (creating) economy upon which the wealth re distributive economy draws. There is no rational explanation for why the boards have decided that one can only be one thing and not many things except for that is the way the grid mentality works,and why Andersen Design has never found its place on the grid. Consequently, to my view one has to extrapolate reality into a linguisitic construct and back again. If one can become a master at this new art form, one can artfully reinvent it in such a way that the linguistic construct mirrors the reality- an act of highly accomplished magic!  Until one masters this craft, one has to understand the conventions of the rhetorical art form, such as if one uses "production" to signify "making process", one will be rejected, but if one uses "making process" to signify "production", one will likely be rewarded. Something to be considered as one attempts to fit into this new rhetorical mindset, which, as seen below in a quote from the NEA website, has accomplished conflating everything with everything,Yet still the interpretation is up for grabs and anybody's rhyme or reason.


ART WORKS Guidelines: Creativity Connects Projects
Grant Program DescriptionCreativity Connects* is an initiative that shows how the arts contribute to the nation’s creative ecosystem, investigates how support systems for the arts are changing, explores how the arts can connect with other sectors that want and utilize creativity, A key component of Creativity Connects is a grant opportunity in the Art Works category that supports collaborative, mutually beneficial partnerships between the arts and non-arts sectors, specifically:


After many years of being both accepted and rejected as an art form and as a craft by various boards, the question still remains "Will Andersen Design be accepted as a legitimate element of the newly emergent "creative ecosystem"?   Stay tuned for the next chapter to find out.

Its Not the Economy, Its the Culture!

December 25, 2020
Trump has brought into focus a long brewing social crisis SELECTED FOR THE BEST OF TREMR darren-deloach-unsplash I was a Republican, until the 2016 convention when a petition gathered enough signatures to let delegates vote their conscience, and was promptly dismissed by a voice vote.  That was when I first became aware that the Republican party was afraid, intimidated and dominated by the Trump base. I felt the party took the traditional base of the party, which included myself, for granted, as if we were party players, guaranteed to support the party, unquestionably, no matter where it went. Deeply ro o ted party obedience has been established. Many whom I once respected and are no longer recognizable. Those of us who did not follow the leaders no longer have a place in the Republican party and have largely become Independents. I voted straight blue in the last election, but consider myself Independent. There is no reason to believe that either one party or the other will continue to
Post a Comment
Read more