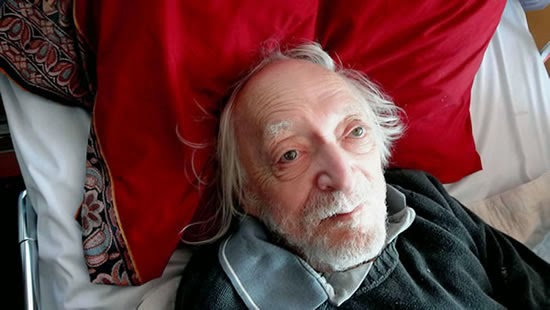 This is my beautiful Dad and my great friend, Weston Neil Andersen, who died today. he had a loving heart and a great mind, intellectual, intuitive, and psychic. He represents that Maine that once was- a place where one can start a business on a dime and let it grow it's own way. I wonder what it will be like not having Dad around as part of the material world.
Dad designed the mugs you see at the side and many other pieces in our line.

Now he is with my mom, Brenda, again.

I feel that I want to write about my father at this time. I have another blog, the first blog I ever created called Sitting On A Log, That name came from the thought of being out in the middle of a forest and sitting on a log and thinking about everything and anything that enters one head, in other words contemplation,and so it seems in concept a more appropriate venue for my present thoughts, rather than this blog, where in I have built an audience based on revealing what is taking place in the State of Maine based on what is hidden away and not much publicized in the statutes. This is what my readers expect to find here.

But this blog would never have existed if I were not my father's daughter. It is my father who imbued me with a sense of value that is indeed offended by the sense of values being imposed upon the Maine people by those whom I have come to call the overlords. For the overlords all value is measured by the dollar but not in gold. Gold is the value that the alchemists use because in alchemy gold comes into being through a transformational process that begins as a piece of  coal and ends as gold. That is a transformational process of the human mind body and spirit- it is a process that takes place uniquely within each individual- not an institutional process, or a collective process, which are the means through which the overlords of Maine have gained their power and access to public resources.

My father was a man with a gift to communicate meaning. He brought profound meaning to the process of making ceramics and creating and running a business. He started with the proceeds of the sale of his levittown house which he had acquired in Ohio through his veteran benefits. He received one small loan with the assistance of the Small Business Administration. In the 1950's that meant that the Small Business Administration co-signed the loan which was procured, not from the taxpayers but from a private banking institution. It is fair to say that such is a public-private relationship but one that does what it promises to do for the  public. It serves to create jobs through helping small businesses to get started but it does not exploit the public's resources by creating a tzar government that has the authority to take money directly out of taxpayer's pockets and deliver it to private capitalists.

In the days when my parents started their business, the only time taxpayer money entered the picture was if the business owner defaulted on his loan. In such a system it is possible to institute limits on the number of defaults which cannot be surpassed- or the dollar amount that those defaults represents which becomes a signal that the system is not working in the interest of the public. The ratio between agreements honored and agreement's defaulted upon would have to remain in a certain range and if it does not then there must be investigative analysis as to why. Such a system also insures that loans are distributed through out the entire economic strata, so that the economy grows as as a whole and does not create an ever widening gap between the haves and the have nots, which goes hand in hand with an expansion of general welfare programs, and creates a system in which the government provides capitalist opportunities for the top half of the economy  and a socialistic rationing system for the bottom half of the economy - Until we get to where we are today under the leadership of Governor Lepage who advocates reducing redistribution of wealth going to rations for bottom and he continues to aggressively expand redistribution of public wealth to capitalists in the top half of the economy, Those capitalists are required to create upper echelon jobs exclusively in order to procure their gifts of Maine taxpayer money.

The household that I grew up in was a business in the home, very much like a farm, which is the sort of household that my father grew up in. A few years ago my father suddenly had a massive seizure- the only one of his life, and he was rushed to the hospital. We followed and as we entered the area where my father was, we heard someone yelling "Chicken !". This was my father who was reliving an early memory when he first learned that the chickens on the farm were to be killed. That was the first time that I realized how that affected my father as a young boy.

Later when World War II started my father considered being a conscientious objector but through personal soul searching he acknowledged that he would kill anyone who tried to kill his own family and so he signed up. He met my mother in London during the war at a ball room dance. They were two very different people but he loved her dearly.

I will bring this post to a close here but I am sure I will continue to tell this story, be it on my blog Sitting On A Log, or elsewhere. When writing here I will be weaving in the theme of this blog. My father, who suffered a brain injury a number of years ago, always knew what I was writing about although he had macular degeneration and did not read and I did not tell him. He would just start talking about the subject on his own, in the manner that he could after his brain injury, which seemed to affect only his ability to communicate thoughts in complex sentences- not his ability to think complex thoughts and to understand everything that is taking place around him. He would spend all day thinking and he was not bored. He had much to think about.  He also had numerous episodes at the hospital during which we were given the lecture that "this was it " but my father miraculously survived over and over again. He lived on because he was concerned about us. We have huge challenges to face now but I think my father made his decision on when to go and I can see the wisdom in it.

While my sister and I were taking care of our family people would say how hard that is to do as it has become the cultural norm to let institution take over that role at the end of life. Now that he is gone I feel so fortunate that I made that choice, allowing me to know my father so well. he was an incredible complex and loving human being and taking care of him in his later years is one of the blessings in my own life. I trust the wisdom of his decision on when to leave and that it is done in the best interest of the family that he leaves behind.