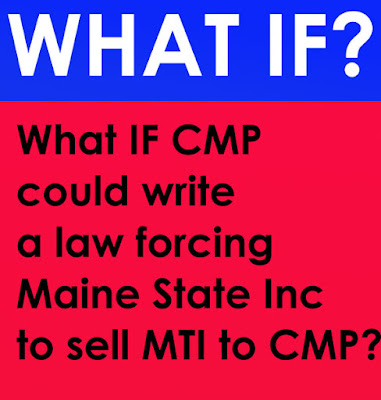 Ever since Governor Longley and the 1976 Maine Legislature deemed the centrally managed economy and the public-private government into existence, every administration and Maine Legislature has been chartering corporations by special act of legislation, willy nilly. This is what I mean when I use the term Maine State Inc- specifically the network of corporations chartered by special act of legislation, which are in most cases public-private relationships.


The latest, currently being attempted addition, to the Maine State Inc corporate network, is a Maine Sate Inc electric utility monopoly, achieved by enacting a law forcing CMP to sell its company to Maine State Inc. This violates the Maine Constitution in a multitude of ways.

The bill is strategically titled,"An Act To Restore Local Ownership and Control of Maine's PowerDelivery Systems"

Local ownership implies local control, but in this case "local ownership" is used to signify state control over a publicly financed corporation. The newly proposed monopoly is referred to in the bill as "consumer-owned" which means paid for with a public debt at a suggested price of four billion dollars.

Conversations in social media project a "democratically governed consumer owned public utility" but there is no democratic governing proposed in the bill. The only public vote is pursuant to the Maine Constitution which imposes a bond spending limit of 2 million dollars. Any amount over that requires 2/3rds approval by the Maine Legislature and an approval by public referendum.

3. Cost of service. "Cost of service" means the total amount that must be collected by the authority to recover its costs but does not include any return on capital investment unless a return is required as security for debt service.


The proposed bill, "An Act To Restore Local Ownership and Control of Maine's Power Delivery Systems", does not include  public referendums in governing the state owned monopoly. The governing board will be  appointed solely by the Governor. The only role played by the Legislature is approving the Governors choice. The governance of the consumer owned utility is closer to an autocracy than a democracy.

The original unelected board created under Governor Longley for the purpose of establishing the centrally managed economy and the public-private state submitted a report which included only two objectives, one was to eliminate the public referendum on municipal bonds, which is not to be found in the latest special act of legislation proposed to charter a new state-run public utility corporate board.


1. Governance; board. The authority is created as a body corporate and politic and a public instrumentality of the State and is governed by the Maine Power Delivery Authority Board in accordance with this section.

Paragraph 1 of the proposed act is a violation of the Maine Constitution, Article IV , Part Third, Section 14, states:


"An Act To Restore Local Ownership and Control of Maine's PowerDelivery Systems" is a special act of legislation whose purpose is to form a corporation (body corporate). It is indisputable that the object of the corporation- Maine power delivery- can be attained otherwise, as is currently the case.

The chartering of a state governed electricity corporation does not meet either of the exceptions to the Maine Constitution's prohibition against the Legislature chartering corporations by special acts of legislation.

The taking of private property does not rise to the level of "urgent need" and so the proposed bill violates Article 1, Declaration of Rights, Section 21 of the Maine Constitution:


Government seizure of private property, compensated or otherwise is a Banana Republic Tactic and will send a warning to any business considering locating in Maine. If the Maine Legislature can simply deem that CMP is forced to sell to the state, then what is next ?

It is worth considering the impact of a state controlled energy monopoly on the common practice implemented by the State of wheeling and dealing in corporate welfare to attract businesses to the state. If the state owns a monopoly on energy delivery will Maine taxpayers find themselves covering the cost of free electricity for global corporations as part of the Maine corporate welfare package? 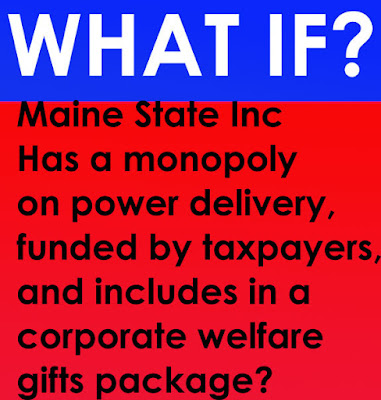